May flowers may make me sneeze

This Month in Writing

I received my developmental edits back for Earthsinger book 2. I hope my editor will forgive me for making her slog through that draft! Now I'm deep in revision mode. I'm a firm believer in production schedules, but I also believe in trying to write the best book I can, and the two are not always compatible. I haven't completely given up on my schedule yet, however, in Project Manager language, it's “at risk.” But we'll see…

I also have a more-finished-than-not draft of another novella in the Angelborn world. If you read Angelborn and were curious about Caleb's friend Wren, never fear, his story is coming.

This Month in Watching

The movie San Andreas didn't suck. I'll go see almost anything The Rock is in, and this movie is on the better end of those mass disaster films that make you want to go take a wilderness survival class or something. Going to see it after coming back from the gym left with me a day-long adrenaline rush.

This Month in Listening

I discovered the song “Here” by Alessia Cara on Spotify and ruled my world for several weeks. It's like the wallflower anthem. Though I think she cheated because any song that samples Portishead* is going to own me at least for a little while. (*I know, I know, it's Isaac Hayes, but it'll always be Portishead to me.)

(The lyrics video is also worth watching.)

This Month in Reading

I practically swallowed whole the first two books in Robin LaFevers's His Fair Assassin series. They're YA historical fiction with fantasy elements and are amazing! I'm also casually re-reading one of my favorite series of all time, The Lumatere Chronicles by Melina Marchetta which starts with Finnikin of the Rock. I say casually because I tend not to read in my genre when I'm working on a manuscript, so I'll be popping in and out until this draft is done.

This Month in Fur

It's shedding season in our house. Clumps of hair in every corner. To battle against it is futile, but my vaccuum cleaner persists it the fight. 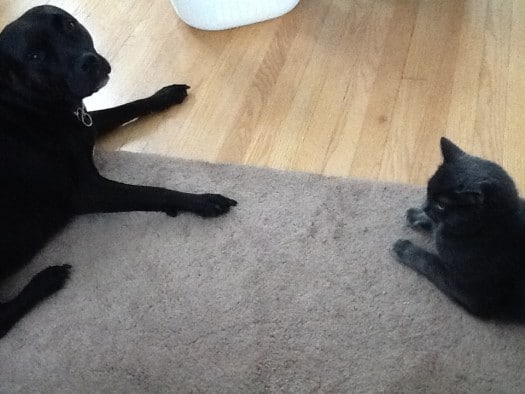 A rare image of the two furry ones together.

Hope your May was swell and you're ready for summer! Hit me up in the comments with your end-of-spring laments.