How did it get so late so soon?

How did it get so late so soon? It’s night before it’s afternoon. December is here before it’s June. My goodness how the time has flewn.

This summer has been a blur wrapped in a whirlwind subsumed by an enigma. Here’s what I’ve been up to:

This Month in Writing

Whispers of Shadow & Flame, book 2 in the Earthsinger Chronicles is out with beta readers as we speak. By next month’s update I should have a release date to announce… very exciting! I’m not going to lie, this book kicked my booty. It’s more of a companion novel to Song of Blood & Stone rather than a true sequel, but it advances the story and the world of the first book. Can’t wait for you guys to read it!

This Month in Watching

Mr. Robot took over my world; I can’t tell you how much I love this show. I don’t watch a lot of TV, but I love it when a show grabs me and doesn’t let go. I tried watching Netflix’s Sense8, but I just couldn’t get into it. I’m told if I stick through the first 3 episodes I’ll be handsomely rewarded, so I may give it another shot at some point.

Cinema-wise, Me and Earl and the Dying Girl was fabulous, though I had some reservations. I can’t decide whether the character of Earl was a magical Negro. He skirted the line for me, even though he was a fascinating character. Something just made me a little uncomfortable about the portrayal. Anyone who’s seen the movie please weigh in.

This Month in Listening

The husband (codename: Megatron) being a huge film soundtrack geek, helped me put together a playlist that I used to finish writing Whispers of Shadow & Flame. If you’re interested in giving it a listen, check it out

Also, the Productivity Booster playlist on Spotify is good to do regular work to.

This Month in Reading

I loved Where One Goes by B.N. Toler. I picked it up because the description is remarkably similar to my initial idea for Angelborn. The story was fantastic and when you read it, make sure to keep a box of tissues close.

This Month in Happenings

My book signing in DC was awesome. I had so much fun with everyone who came out! Check my Events page for more in-person sightings of yours truly. Sometimes I do leave my writing cave and venture out into the world.

For example, I also went to the Romance Writers of America conference in New York City last week and had a terrific, exhausting time. This is interior the hotel we stayed at in Times Square. It was from the future. 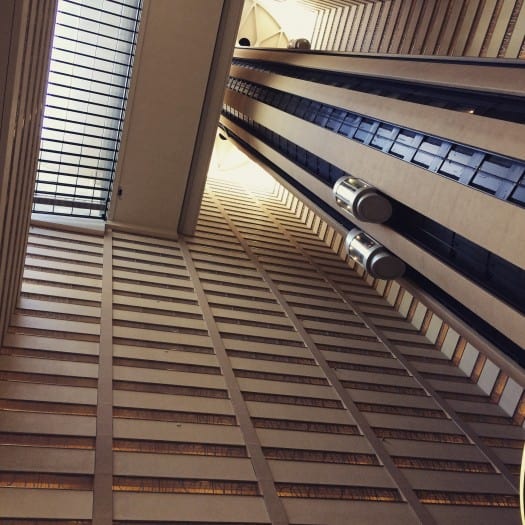 Over the next few months, members of my mailing list will get the chance to win books and swag from the conference, so make sure you’re signed up!

This Month in Fur 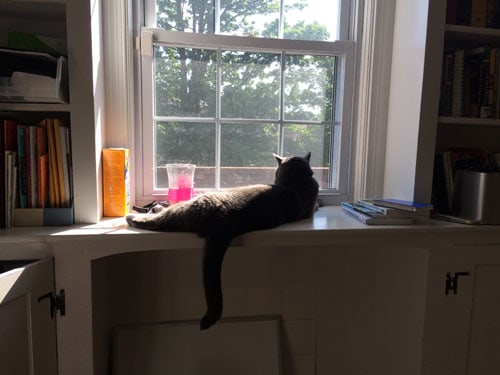 Sterlyng hangs out in my office

I hope your summer has been fabulous so far!

I disagree, Les. Earl wasn’t magical, he was the Mentor. He was the guide through the story and the one who held up the mirror to the hero that caused him to change. Earl shoved the hero into the Dark Night and stood there on the other side when he came through it. I liked his character.

I could be being extra sensitive. I agree that he’s the mentor, or as Michael Hauge says, the “reflection” character. And it was great that he was self-possessed and confident in contrast to the main character’s flawed view of himself. But that mentor can skirt a bit close to magical territory…

I’m not at the beta reader stage yet for this WIP, but I hope to get there soon. And I also love Mr. Robot! It’s so trippy. Did you see what Tyrell did last Wednesday? I told my husband, “Something’s wrong with that boy. He got that twitch in his eye,” lol!

I’m a week behind in Mr. Robot, but I think that could be said of Tyrell every week, hahaha! Good luck with your manuscript!