This Year in Writing 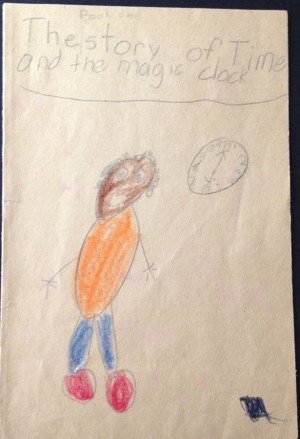 This year I published my first book. (As well as my second, third and fourth). It was the turning point in a journey that started when I was five years old and wrote my first “novel.” Titled Time and the Magic Clock, the story was about a boy who was late for dinner.)

What does a girl so shy that she can barely answer the phone in her own home for fear of talking to strangers do to engage with the world? Read. I read everything from horror to classics to poetry and biographies. Sometimes when I was bored and I'd read everything I had, I would open up the encyclopedia.

I had a typewriter with green ink, which I used to write stories back then. This was before we had a computer in the house (and I'm old enough to have lived in a such a time and to remember the exact day that AOL first got the “World Wide Web”). Pages and pages of stories piled up and the dream grew. Could I really do this one day, for real? Would people want to read the things I write?

Well a surprising number of you did want to read what I wrote, and for that I am endlessly grateful. When I published Song of Blood & Stone in January, I set a goal to sell 500 copies by the end of the year. By April, I had well exceeded that, which was an amazing birthday surprise.

That month, I also dropped the novella Angelborn. I just uploaded it one day and hit publish and didn't go through all the hoopla I had with the first book. I'd written the first draft in two weeks right before NaNoWriMo 2014 and spent some time cleaning it up while Song of Blood & Stone was with the editor.

It was a story that had come from a dream I had of a girl who falls in love with an invisible boy who only she can see. I'd started writing a very different version of that premise years ago, in a book some of you who know me may remember called Girl Electric. Anyway, Angelborn found an audience as well, without much promotion, and once again I was blown away by the fact that people were reading my stories and enjoying them, for the most part.

Whispers of Shadow & Flame was the next book released in October. A surprising number of people asked if it was me on the cover of Song (it's not — are there authors that put themselves on the covers of their fiction books? Because my ego is not that big, I promise) but that gave me the idea to put someone I knew on the cover of the next book. I thought my brother Paul would make a pretty good Darvyn. He's reasonably photogenic and was up for the challenge.

I gave him super helpful notes like “look realistically hopeful” and “you need to look like you're balanced on the precipice of change.” Somehow he and photographer Bryony Shearmur took this and translated into some awesome pictures. And James Egan worked his magic on it once again and the cover kicked all kinds of ass.

I don't know when I decided that I should publish four books this year, but once it got into my head, it wouldn't leave. I made it under the deadline with Angelfall in December. It's a book I drafted really fast and agonized over during the editing process. Not that that's different than any of the other books (actually, with Whispers I agonized over the whole thing).

I really wanted to write a straightforward “angel falls in love with a half-angel” story, but, as these things often happen, the narrative took on a life of its own and went somewhere that I couldn't talk it out of. I love the story—I love all the stories, I wouldn't let them out into the world unless I adored them—even when they're not quite the tales I'd intended to tell.

So there you have it, my first year as a published author. It's been hard, much harder than I thought. It reminds me of before I got married, when people would always tell us that marriage is hard. We believed them, but didn't know exactly what they meant. What's so hard about it? What can you do to make it less hard? Knowing and experiencing are different things and as much preparation as you do beforehand, it's never really enough. But that's okay. The best things in life are hard. That doesn't mean you love them any less.

Balancing running a business full-time and being an author, publisher, and marketer (another business) is hard—but I love it. I also love that I'm running towards a goal I never thought I'd be able to reach. Being a published author always seemed like a far-off dream that I wasn't in control of. Taking control and making it happen is one of the things I'm most proud of in my life.

And if you've made it this far in the mega-long-ramble-post, I'd like to thank you. Yes, you. Readers rule! You're the reason for all of this, and that's the truly amazing thing.

Next Year in Writing

Cry of Metal & Bone (Earthsinger Chronicles, book 3) is coming, tentatively in late spring. Plus a bonus Earthsinger novella! Woohoo! And at the end of the year, book 4. (Whew.) Then, of course, there will be Angelrise, the next in the Angelborn cycle. So that's four.

And then something new. Or two something news to round out the number. Or something old and something new (prequel anyone?). Basically, I haven't decided yet. I'll have to see how it goes.

This Year in Other Stuff

What do you have in store for the new year?

🙂 Thank you! Your schedule for next year is totally inspiring!

I want to place my vote to have Girl Electric on the publishing calendar.

Noted. 😉 It will see the light of day… the only question is when.

You has such a great year! Congrats to you!