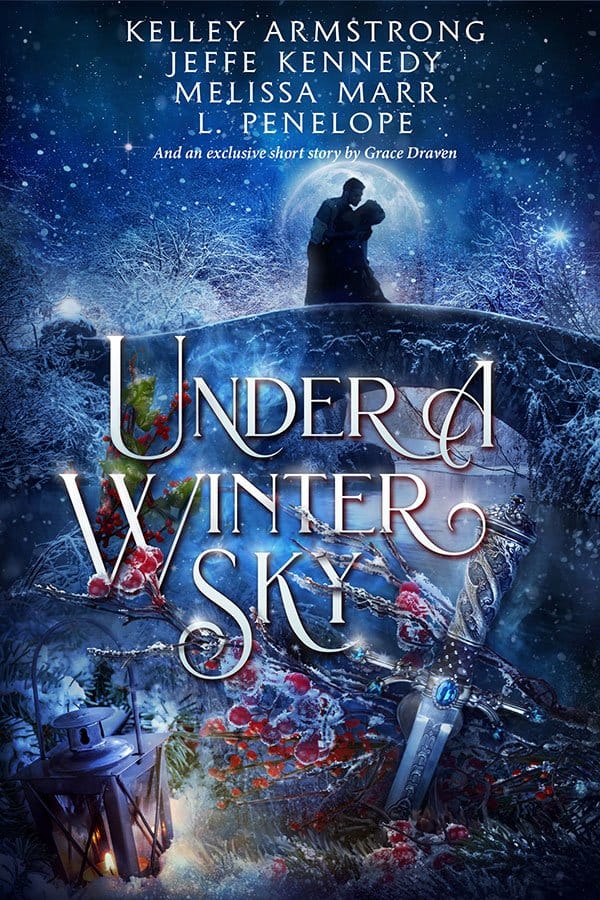 Under a Winter Sky

Five powerhouse authors of fantasy and urban fantasy bring you a feast of romantic midwinter holiday adventures. These heartwarming and pulse-pounding tales celebrate Hanukah, Christmas, the solstice, Yule – and holidays from worlds beyond our own. With fancy-dress balls, faery bargains, time travel, blood sacrifice, and festive cocktails, these stories will delight lovers of fantasy and romance, with a dash of seasonal joy.

The North Yorkshire moors are always a magical place, but they’re particularly enchanting at the holidays…especially if one gets to travel back in time to a Victorian Christmas. For Bronwyn Dale, it is the stuff of dreams. Fancy-dress balls, quirky small-town traditions, even that classic one-horse open sleigh, complete with jingle bells. There’s just the tiny problem of the Butterfly Effect. How does a time-traveler make a difference without disrupting the future forever?

The Long Night of the Crystalline Moon, a prequel novella to Heirs of Magic, by Jeffe Kennedy

Shapeshifter Prince Rhyian doesn’t especially want to spend the Feast of Moranu at Castle Ordnung. First of all, it’s literally freezing there, an uncomfortable change from the tropical paradise of his home. Secondly, it’s a mossback castle which means thick walls and too many rules. Thirdly, his childhood playmate and current nemesis, Lena, will be there. Not exactly a cause for celebration.

Princess Salena Nakoa KauPo nearly wriggled out of traveling to Ordnung with her parents, but her mother put her foot down declaring that, since everyone who ever mattered to her was going to be there to celebrate the 25th year of High Queen Ursula’s reign, Lena can suffer through a feast and a ball for one night. Of course, “everyone” includes the sons and daughters of her parents’ friends, and it also means that Rhyian, insufferable Prince of the Tala, will attend.

But on this special anniversary year, Moranu’s sacred feast falls on the long night of the crystalline moon—and Rhy and Lena discover there’s more than a bit of magic in the air.

Half-dead witch Geneviève Crowe makes her living beheading the dead–and spends her free time trying not to get too attached to her business partner,  Eli Stonecroft, a faery in self-imposed exile in New Orleans. With a killer at her throat and a blood martini in her hand, Gen accepts what seems like a straight-forward faery bargain, but soon realizes that if she can't figure out a way out of this faery bargain, she'll be planning a wedding after the holidays.

Brought to live among the Cavefolk as an infant, Mooriah has long sought to secure her place in the clan and lose her outsider status. She’s a powerful blood mage, and when the chieftain’s son asks for help securing the safety of the clan, she agrees. But though she’s long been drawn to the warrior, any relationship between the two is forbidden. The arrival of a mysterious stranger with a tempting offer tests her loyalties, and when betrayal looms, will Mooriah’s secrets and hidden power put the future she’s dreamed of—and her adopted home—in jeopardy.

A Memory Of Summer, a Wraith Kings Novelette, by Grace Draven

Spinsterhood has never bothered or embarrassed the independent Emerence Ipsan, and the winter festival of Delyalda keeps her far too busy managing her father's shops to worry about matters as trivial as marriage.

Until the arrival of a young Quereci warrior with old eyes and an admiring gaze makes her question that notion.

** Special offer ** When you order direct from me using the green links below, you can get the ebook FREE when you order the signed paperback edition. Just add both to your cart for the discount! (Direct paperback sales are US only. Add personalization information in the cart.)